Humic acid is traditional chemical NPK fertilizer promoters. Humic acid can promote the absorption of NPK in crops, which can not only reduce costs but also improve soil

Nitrogen fertilizers are mostly urea, and ammonium nitrogen is unstable and volatile. After mixing with humic acid fertilizer, because humic acid contains functional groups such as carboxyl and phenolic carboxyl groups, it has strong ion exchange capacity and adsorption capacity, which can reduce the loss of ammonium nitrogen. Urea is an amide nitrogen fertilizer, and the nitrogen contained in it needs to be decomposed and converted into ammonium carbonate by the urease secreted by urea bacteria before it can be absorbed by plants. If urea is applied to the calcareous soil, the ammonium bicarbonate produced by the decomposition of urea will also cause volatilization loss due to alkalinity, which is one of the reasons why the nitrogen utilization rate of urea fertilizer is not high. Adding humic acid to urea has obvious synergistic effect on urea. First, the activity of urease is inhibited to slow down the decomposition of urea and reduce volatilization; second, humic acid can form a complex with urea, gradually decompose and release nitrogen, prolong the fertilizer effect of urea, and at the same time, the biological activity of humic acid can promote the root system of plants Development and nitrogen metabolism in the body, promoting nitrogen absorption. 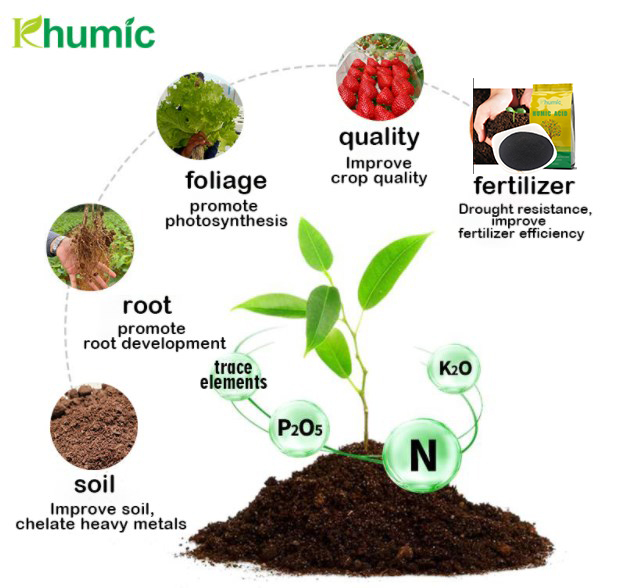 Humic acid contains functional groups that can absorb and store potassium ions, which can not only prevent its loss with water in sandy soil and leaching soil, but also prevent the fixation of potassium in cohesive soil. Some parts of humic acid are small-molecule humic acids such as fulvic acid, which have a dissolution effect on minerals such as potassium silicate and potassium feldspar, which can slowly decompose them, increase the release of potassium, and increase the content of available potassium.