Chronic inflammatory diseases like diabetes are on a rise in the Western world. Based on the tsunami of new cases every year, new therapeutic measures must be considered. A promising avenue might involve the attenuation of underlying inflammation through natural health products (NHPs). This is because most NHPs have a rich history in traditional medicine and might be considered safer under appropriate doses and conditions. However, the biggest impediment in NHP research is that rarely do these products come with verified health benefits or dosing schedules established through modern scientific research. Fulvic acid , one such NHP, comes from humic substances produced by microorganisms in soil. Traditional medicine and modern research claim fulvic acid can modulate the immune system, influence the oxidative state of cells, and improve gastrointestinal function; all of which are hallmarks of diabetes. This minireview outlines the available peer-reviewed research on fulvic acid liquid/powder and examines its anecdotal health claims. We show that although available research has been minimal, there is substantial evidence to pursue fulvic acid research in preventing chronic inflammatory diseases, including diabetes. 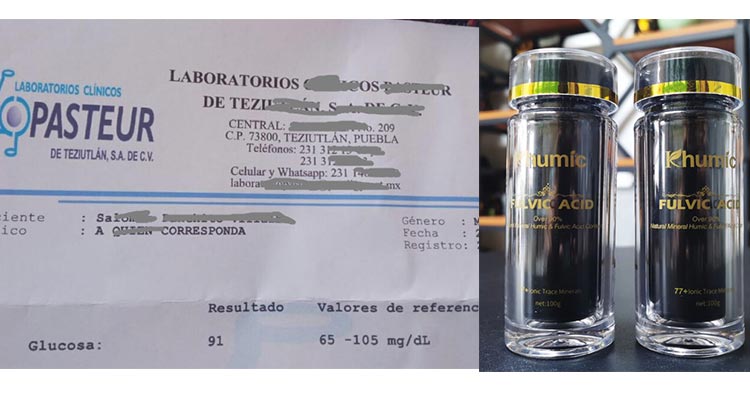 Type 2 Diabetes Mellitus (T2DM) is characterized by improper insulin signalling and attenuated glucose uptake into cells . This can lead to prolonged hyperglycaemia after feeding and adverse symptoms . The cause of diabetes remains a mystery, but research associates inflammation, oxidative stress, and changes in the gut microbiome among the many causative factors . Fulvic acid, which contains fulvic acid, has been shown to reduce hyperglycaemia in diabetic rats and increase SOD activity in pancreatic beta cells. Unfortunately though, there is no direct evidence in the English language showing only fulvic acid in preventing T2DM symptoms. However, the accumulative effects highlighted in this review and the last two studies suggest its therapeutic potential.

Those with T2DM show signs of chronic inflammation and elevated proinflammatory cytokines in serum like TNF-α, IL-1, and IL-6 . Fulvic acid is shown to reduce these types of cytokines and proinflammatory markers in animal models. In addition, a proposed treatment regime for T2DM involves nonsteroidal anti-inflammatory drugs (NSAIDs) to alleviate symptoms . Fulvic acid might fit as an adjunct treatment to reduce markers of oxidative stress and inflammation as Fulvic acid can act in a similar manner to NSAIDs. Fulvic acid might also reduce oxidative damage and increase antioxidant enzymes like SOD, CAT, and GPx. Beta cells, which are responsible for insulin production, undergo oxidative damage during T2DM . Protecting the redox state of beta cells may prove beneficial in preventing T2DM. Lastly, patients with T2DM are found with a change in gut microbial composition, and fulvic acid may influence the bacterial community .

the potential for fulvic acid to be a candidate in preventing inflammatory diseases like diabetes arises. This is promising as our current approach to these kinds of diseases is lacking. It is important to note that fulvic acid research in some cases is conflicting, which is thought to be a result of variance in dosage, parent material, and isolation procedure. In addition, there is no consensus on the structure of fulvic acid, a standard isolation, or parent material. Thus, it is of paramount concern to reconcile these factors and establish dosing for age groups and differing fulvic acid. This will help make conclusive statements regarding fulvic acid function and its influence on immune-related diseases.